Tags: Blind Willie Johnson, Blind Willie Johnson with Willie B. Richardson, bottleneck guitar, Country Blues, DOCD-5691, Gospel, guitar ev, slide guitar, Texas Blues
DOCD-5691 Blind Willie Johnson Vol. 2 (11th December 1929 to 20th April 1930)
Blind Willie Johnson, vocal, guitar.
Includes: Willie B. Richardson, vocal.
Genres; Gospel, Guitar Evangelist, Bottleneck-slide guitar. Texas.
Informative booklet notes by Mark Makin.
Detailed discography.
Abridged booklet notes
By the end of the 1920s, Blind Willie Johnson had probably already heavily influenced many of the performing blues and gospel singers of Black America. It is possible to see his influence in many artists at the time, such as Ramblin’ Thomas and Blind Willie McTell, who became a friend of Johnson’s. McTell’s songs such as “Ain’t It Grand To Be A Christian” and “Dying Gambler” recorded in the mid 30s show a heavy Willie Johnson influence.
When Willie returned to the New Orleans studio on the second day in 1929, he had a female singer with him. She is not named but she certainly sounds more insistent and uncontrolled compared to the restrained and precise Willie B. Richardson. Interestingly, the first song he recorded was You’ll Need Somebody On Your Bond – interesting because it is the only song that he returned to at a later date to try a second version. The first version recorded at this session, is a driving, up-tempo rendering. When The War Was On was recorded next and sees Willie back in his staccato strumming and flat picking style. It is the second narrative piece that he recorded. This time it is an appraisal of the privations and hard times caused by World War 1. Praise God I’m Satisfied remains in the same vein with a strong strumming theme accented by link phrases on the bass line. Take Your Burden To The Lord And Leave It There, is again similar. This song probably falls into the category of one of Willie’s half dozen ‘great performances’. The female singer seems more exuberant and complementary to the structure of his singing and much stronger flat picked melody pattern and the whole seems to drive along effortlessly. Take Your Stand has that insistent ‘Dum-Ching’ rhythm that characterised Sweeter As The Years Roll By. The performance is scrappier than usual. Willie’s voice is very raspy and his background vocal assistant is all over the place. Despite the title, Willie sings “Take A Stand”… all through the song. His last song recorded in this session was the memorable epic narrative story (his third and final) about the sinking of the Titanic in April of 1912 – God Moves On The Water. This was still a very raw recollection to many people despite the intervening 18 years since the event. Willie makes quite a detailed story of it.
In six months time, Columbia again brought him to the recording studio. Willie B. accompanied him this time – whether this was Willie’s choice or the record company’s request is not known. They appeared at Columbia’s studio in Atlanta, Georgia on 20th April 1930. They must have worked particularly hard as ten releases came from this last session. Willie B. is higher in the mix than on previous Dallas recordings. The first recording, Can’t Nobody Hide From God, seems to have been well rehearsed between the two of them. If It Had Not Been For Jesus, is an unusual 3:4 time waltz and Go With Me To That Land, which follows it, is from white country music sources. Both these last two pieces seem to have Willie singing and playing much more tentatively as if he were unfamiliar with the style. Apparently though, despite it being the depths of the Great Depression, Willie was still selling records in high numbers and even these discs were pressed in numbers approaching 2-2500.
His next two songs are again using his flat picked style. The Rain Don’t Fall On Me, and Trouble Will Soon Be Over, seem to be much more assured than the previous two hesitant performances. These would be followed by the ‘iconic’ The Soul Of A Man. This song has become well known and well copied by performers like Sister Rosetta Tharpe. Everybody Ought To Treat A Stranger Right followed in much the same vein and then they came to another change in style. Church I’m Fully Saved Today. This is now extremely close to the world of the congregation and the preacher but without the hand clapping and tambourines. Technically, it is almost a version of “When I Lay My Burden Down”. John The Revelator is the last song that Willie would record in this sing-along vein and the session would conclude with, rather prophetically, a re-working of You’re Gonna Need Somebody On Your Bond It is rather satisfying that the last thing that we hear from Blind Willie Johnson is one of his unique and haunting, delicate slide solos.
Blind Willie Johnson’s earlier recordings can be found on Document DOCD-5690 Blind Willie Johnson Vol. 1 (1927 to 10th December 1929) 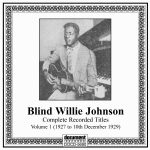 Tags: Blind Willie Johnson, Blind Willie Johnson with Willie B. Richardson, bottleneck guitar, Country Blues, DOCD-5691, Gospel, guitar ev, slide guitar, Texas Blues
This website uses cookies to improve your experience. We'll assume you're ok with this, but you can opt-out if you wish. Cookie settingsACCEPT
Privacy & Cookies Policy
This website uses cookies to improve your experience while you navigate through the website. Out of these cookies, the cookies that are categorized as necessary are stored on your browser as they are essential for the working of basic functionalities of the website. We also use third-party cookies that help us analyze and understand how you use this website. These cookies will be stored in your browser only with your consent. You also have the option to opt-out of these cookies. But opting out of some of these cookies may have an effect on your browsing experience.
Necessary Always Enabled
Necessary cookies are absolutely essential for the website to function properly. This category only includes cookies that ensures basic functionalities and security features of the website. These cookies do not store any personal information.
Non-necessary
Any cookies that may not be particularly necessary for the website to function and is used specifically to collect user personal data via analytics, ads, other embedded contents are termed as non-necessary cookies. It is mandatory to procure user consent prior to running these cookies on your website.
SAVE & ACCEPT
Loading Comments...