The idea of Christmas themed blues and gospel numbers stretches back to the very dawn of the
recorded genres. “Hooray for Christmas” exclaims Bessie Smith to kick off her soon to be classic ‘At
the Christmas Ball’ which inaugurated the Christmas blues tradition when it was recorded in
November 1925 for Columbia. A year later, circa December 1926, the gospel Christmas tradition was
launched when the Elkins-Payne Jubilee Singers recorded Silent Night, Holy Night for Paramount
Records. After these recordings it was off to the races with numerous Christmas blues numbers
recorded by singers of all stripes, a pace that continued as blues evolved into R&B and then rock and
roll. For some reason there are far fewer gospel Christmas songs although there were plenty of
Christmas sermons in the 1920s and 1930s when recorded sermons rivalled blues in popularity
among black audiences.

Going hand in hand with Christmas is quite a number of New Year songs, a good vehicle for
juxtaposing the problems of the past year with the glimmer of hope that the upcoming year will
bring better fortune. Whether these artists sung these numbers as part of their regular repertoire is
unclear, but it is almost certainly the case that many of these songs were recorded at the prompting
of the record companies. Like any business they were always looking for a new angle or gimmick to
sell records and advertised these boldly, often with full-page ads, in black newspapers like the
Chicago Defender.

Perhaps you think this is a bit cynical but then you probably still believe in Santa Clause and good will
towards men! Well, sit back, tip a glass of holiday cheer and enjoy our survey of Yuletide classics
spanning the 1920s through the 1950s, a simpler, more wholesome time!

Also available in the Series 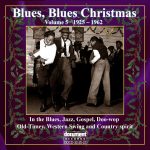 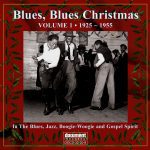 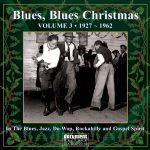 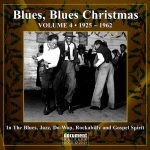 Tags: Blues, Blues Blues Christmas, Blues Christmas. Christmas Jazz, Bluesy Christmas, Christmas blues, Christmas CDs, Christmas Gospel, Christmas Morning Blues, Christmas Music, Christmas Stocking Blues, Christmas Swing, Christmas Tree Blues, DOCD-32-20-15, Holiday Music, Jazzy Christmas, New Year Blues, Santa Claus Blues, Swinging Christmas, Vintage Christmas Music, Xmas blues
This website uses cookies to improve your experience. We'll assume you're ok with this, but you can opt-out if you wish. Cookie settingsACCEPT
Privacy & Cookies Policy
This website uses cookies to improve your experience while you navigate through the website. Out of these cookies, the cookies that are categorized as necessary are stored on your browser as they are essential for the working of basic functionalities of the website. We also use third-party cookies that help us analyze and understand how you use this website. These cookies will be stored in your browser only with your consent. You also have the option to opt-out of these cookies. But opting out of some of these cookies may have an effect on your browsing experience.
Necessary Always Enabled
Necessary cookies are absolutely essential for the website to function properly. This category only includes cookies that ensures basic functionalities and security features of the website. These cookies do not store any personal information.
Non-necessary
Any cookies that may not be particularly necessary for the website to function and is used specifically to collect user personal data via analytics, ads, other embedded contents are termed as non-necessary cookies. It is mandatory to procure user consent prior to running these cookies on your website.
SAVE & ACCEPT
Loading Comments...