TO BUY THIS ALBUM or DOWNLOAD TRACKS -Scroll down page
♦ Hit Add to Cart Button to add each desired product to the cart
♦ Hit Cart Icon to review items found below the search bar above.
♦ Global Shipping – shown at checkout

This album presents what must be one of the most historic recordings in African-American history .A fascinating insight into the man who inspired among others the Allman Brothers, Taj Mahal, Bob Dylan and many others.  The history of these Library of Congress, Archive of American Folk Song, recordings is rooted in a visit made by John and Ruby Lomax to Atlanta, Georgia during November 1940. It is reported that Ruby spotted a “Negro man with a guitar” entertaining at a pig n whistle stand. Stopping their car to enquire, they discovered that the individual was Blind Willie McTell. The next morning in their hotel room he “sang and played his 12-string guitar vigorously for two hours”, forty or so minutes of which were committed to tape.  Blind Willie discusses his life, recording career and the history behind his music. Twelve excellent performances including blues, spirituals, ballads and rags can be heard. His skills as a 12-string guitarist, including some beautiful bottleneck / slide guitar, underline his reputation as being one of the finest musicians from Georgia. 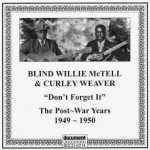 Tags: 12 string, BDCD-6001, Blind Willie McTell, Blues Guitar, bottleneck blues guitar, Bottleneck Guitar Slide guitar, Georgia Blues, Ragtime Guitar, slide, twelve-string
This website uses cookies to improve your experience. We'll assume you're ok with this, but you can opt-out if you wish. Cookie settingsACCEPT
Privacy & Cookies Policy
This website uses cookies to improve your experience while you navigate through the website. Out of these cookies, the cookies that are categorized as necessary are stored on your browser as they are essential for the working of basic functionalities of the website. We also use third-party cookies that help us analyze and understand how you use this website. These cookies will be stored in your browser only with your consent. You also have the option to opt-out of these cookies. But opting out of some of these cookies may have an effect on your browsing experience.
Necessary Always Enabled
Necessary cookies are absolutely essential for the website to function properly. This category only includes cookies that ensures basic functionalities and security features of the website. These cookies do not store any personal information.
Non-necessary
Any cookies that may not be particularly necessary for the website to function and is used specifically to collect user personal data via analytics, ads, other embedded contents are termed as non-necessary cookies. It is mandatory to procure user consent prior to running these cookies on your website.
SAVE & ACCEPT
0
0
Your Cart
Your cart is emptyReturn to Shop
Continue Shopping