♦ Thank you for buying direct from Document Records.
♦ Ordering direct from Document helps preserve this music.
♦ Download albums (FLAC or MP3)include illustrated booklet notes.
♦ To listen to a sample, use the Play button to the left of any track.
♦To add product to the cart please use the Add To Cart button.
♦To view cart, click Cart Icon found below the search bar above.
♦Prices include packaging and tax where applicable.
♦Worldwide shipping is shown at Checkout.
♦You are protected by PayPal and Document’s Global Guarantee

One of the first of the classic female blues singers to record, Lucille Hegamin’s material was mostly drawn from  the kind of blues that would have been performed on the vaudeville stage, at the time. A talented singer, who was reasonably versatile, Hegamin’s entire output in the ’20s has been reissued on three Document CDs. The initial volume covers her first seventeen months of visiting the recording studios. Highlights include The Jazz Me Blues (from November, 1920), Arkansas Blues, Wang Wang Blues, Wabash Blues, and two versions of a future standard that Hegamin first introduced, He May Be Your Man But He Comes to See Me Sometimes. A special bonus is a pair of instrumentals, Strut Miss Lizzie and Sweet Mama, Papa’s Getting Mad, from May, 1921. In most cases, Hegamin is backed by her Blue Flame Syncopators, a combo of mostly obscure players that includes her husband Bill Hegamin on piano, Ralph Escudero on tuba, and drummer Kaiser Marshall, along with four horns.

Following closely at the heels of Mamie Smith, Lucille Hegamin first recorded as early as October, 1920 for Victor but her ‘Dallas Blues’ was rejected and her recording career proper, initially for the East Coast Arto label, began the following month. Her first record, coupling The Jazz Me Blues and Everybody’s Blues, sold well and her second, Arkansas Blues / I’ll Be Good But I’ll Be Lonesome, was a big hit.

By the time her recording career stalled, late in 1926, she had made over seventy-five sides. A single record for OKeh in 1932 was her pre-war swan-song and it was to be thirty years before she recorded again (for Prestige Bluesville). Lucille had been a regular on the vaudeville circuit since before World War One and her clear diction and smart presentation were marks of her professionalism. Her material was usually fairly strong, although saccharin sentiment did sometimes creep in on numbers like Mississippi Blues and ‘Land of Cotton Blues’. However, her approach was usually upbeat and light, in complete contrast to the deep, sombre blues of an Ida Cox. 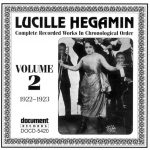 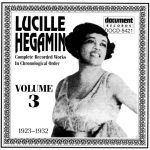 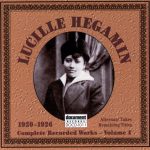