Tags: Blues Singers, Booze and Blues, Classic Blues, Classic Blues and Vaudeville Singers, Classic Blues Jazz & Vaudeville Singers, DOCD-5582, Female Blues Vocalists, Ma Rainey, ma rainey discography, Ma Rainey True Story, Ma Rainey's Black Bottom, Mother of the Blues
This Review Comes Courtesy of All Music Guide and was written by Arwulf Arwulf, Volume two in Document’s five-part complete Ma Rainey edition opens with six recordings dating from October 1924 with instrumental backing by her Georgia Jazz Band, a sextet drawn from the Fletcher Henderson Orchestra. “See See Rider Blues,” “Jelly Bean Blues,” and “Countin’ the Blues” are among the best known and most commonly reissued titles in Rainey‘s entire discography, largely due to the presence of a 24-year-old cornetist from New Orleans named Louis Armstrong. Other Hendersonians on these sides were clarinettists Don Redman and trombonist Big Charlie Green. The sound of Charlie Dixon tracing a simple ascending/descending pattern on his banjo while Rainey sings the chorus of the “Jelly Bean Blues” is one of the great magical moments in all of early 20th century music. Decades later, Louis Armstrong would compare this little record to an aria by Giuseppe Verdi. After a one-shot reunion with Lovie Austin, Tommy Ladnier, and Jimmy O’Bryant for the “Cell Bound Blues,” Rainey recorded four titles (and two alternate takes) accompanied by a smaller group, billed as her Georgia Band, with an unidentified and rather shrill kazoo player who doubled on slide whistle; saxophonist George “Hooks” Tilford, either Lil Henderson or Georgia Tom Dorsey at the piano, and a percussionist who was either Cedric Odom or Happy Bolton. The band that backed her on tracks 16-23 (recorded in July 1925) had similar personnel, with the addition of a cornetist whose name was either Robert Taylor or Kid Henderson. At this stage in her career, Rainey‘s voice was deepening in pitch. Her slow and purposeful delivery makes each performance seem as serious as ritual, even when slide whistle and kazoo add an element of the ridiculous.
Also Available 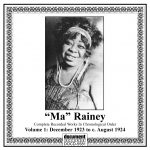 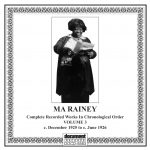 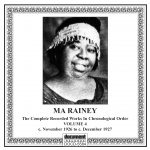 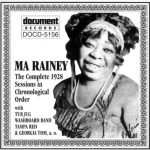 Tags: Blues Singers, Booze and Blues, Classic Blues, Classic Blues and Vaudeville Singers, Classic Blues Jazz & Vaudeville Singers, DOCD-5582, Female Blues Vocalists, Ma Rainey, ma rainey discography, Ma Rainey True Story, Ma Rainey's Black Bottom, Mother of the Blues
This website uses cookies to improve your experience. We'll assume you're ok with this, but you can opt-out if you wish. Cookie settingsACCEPT
Privacy & Cookies Policy
This website uses cookies to improve your experience while you navigate through the website. Out of these cookies, the cookies that are categorized as necessary are stored on your browser as they are essential for the working of basic functionalities of the website. We also use third-party cookies that help us analyze and understand how you use this website. These cookies will be stored in your browser only with your consent. You also have the option to opt-out of these cookies. But opting out of some of these cookies may have an effect on your browsing experience.
Necessary Always Enabled
Necessary cookies are absolutely essential for the website to function properly. This category only includes cookies that ensures basic functionalities and security features of the website. These cookies do not store any personal information.
Non-necessary
Any cookies that may not be particularly necessary for the website to function and is used specifically to collect user personal data via analytics, ads, other embedded contents are termed as non-necessary cookies. It is mandatory to procure user consent prior to running these cookies on your website.
SAVE & ACCEPT
Loading Comments...