♦ Thank you for buying direct from Document Records.
♦ Ordering direct from Document helps preserve this music.
♦ Download albums (FLAC or MP3) include illustrated booklet notes.
♦ To listen to a sample, use the Play button to the left of any track.
♦ To add product to the cart please use the Add To Cart button.
♦ To view cart, click Cart Icon found below the search bar above.
♦ Prices include packaging and tax where applicable.
♦ Worldwide shipping is shown at Checkout.
♦ You are protected by PayPal and Document’s Global Guarantee.

Gary Davis made his first records in New York in 1935, he’d been a guitarist for many years; born in Laurens, SC in 1896, by 1904 he owned his own guitar and was playing for dances. By 1911, he was a member of Willie Walker‘s string band in Greenville. At some point, probably during his first marriage, which lasted from 1919 to 1924, Davis moved to North Carolina, and when he came to record, he was an associate of Blind Boy Fuller, who was also to make his debut on disc on this occasion. Gary Davis was a guitar genius; that much is obvious from the first notes of this album. He’d taught Fuller a good deal, but Fuller, though an excellent player, never approached Davis’s total command of the instrument., He was not to be ordained until 1937, and in 1935 he was still prepared, albeit uneasily, to sing blues; but he undoubtedly saw himself as a guitarist for God. In later years, he became a god for guitarists, many of whom were made uneasy by his intense fundamentalism, and tried to persuade themselves that Davis performed a non-existent “holy blues”. When he did sing the blues, he was a fine and distinctive executant, bringing to the form a much more introspective, personal vocal delivery than the one he used for his religious music. In that area, his singing and preaching are those of a street evangelist, determined both to make himself heard over competing noise, and to attract potential converts by the sheer fervour of his performance. His ferocity seems to have been daunting even to black record buyers of the day, for his 1935 discs do not appear to have sold widely. At some time not long after his arrival in New York, Gary Davis cut the instrumental showpiece Civil War March, which was un-issued for many years. Later recordings of it were usually called “Soldier’s Drill”, but it’s likely enough that it dates back, if not to the Civil War, then to the turn of the century when Davis was learning to play. In 1949, Davis made his last issued recordings for a black audience, using a wooden bodied guitar which had a softer sound than the metal bodied National resonator guitar that he had used, in 1935. Chris Smith Copyright 1991, 2003 Document Records.
Also available 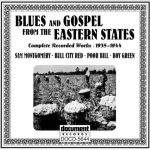 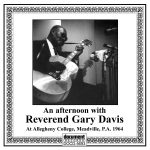 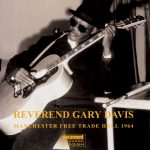 Tags: American Record Company, ARC, Asch, Blind Boy Fuller, Blind Gary Davis, Blues Guitar, Bull City Red, Carolina Blues, Chris Smith, Country Blues, Country Blues Guitar, DOCD-5060, George Washington, Gospel, Guitar Evangelist, Lenox, National Guitar, North Carolina Blues, Piedmont Guitar, Ragtime Guitar, Rev Gary Davis, Rev. Blind Gary Davis, South Carolina Blues
This website uses cookies to improve your experience. We'll assume you're ok with this, but you can opt-out if you wish. Cookie settingsACCEPT
Privacy & Cookies Policy
This website uses cookies to improve your experience while you navigate through the website. Out of these cookies, the cookies that are categorized as necessary are stored on your browser as they are essential for the working of basic functionalities of the website. We also use third-party cookies that help us analyze and understand how you use this website. These cookies will be stored in your browser only with your consent. You also have the option to opt-out of these cookies. But opting out of some of these cookies may have an effect on your browsing experience.
Necessary Always Enabled
Necessary cookies are absolutely essential for the website to function properly. This category only includes cookies that ensures basic functionalities and security features of the website. These cookies do not store any personal information.
Non-necessary
Any cookies that may not be particularly necessary for the website to function and is used specifically to collect user personal data via analytics, ads, other embedded contents are termed as non-necessary cookies. It is mandatory to procure user consent prior to running these cookies on your website.
SAVE & ACCEPT
Loading Comments...