This Skip James concert was  performed at the student–run Indiana University Folksong Club at Bloomington, Indiana the small auditorium was filled with about two hundred persons who knew more about local bluegrass traditions (Bill Monroe’s Sunday bam fests took place in nearby Beanblossom) than blues. Yet as  one can hear on this recording, they were not disappointed.

Skip James played a total of twenty “pieces” from his repertoire. These included God Is Real which to my knowledge he had not recorded before, as well as two other “spirituals”: Look At The People (Got To Go To Judgement) and Keep Your Lamp Trimmed And Burning. Skip James’s penchant for mixing sacred and secular songs was well received by an audience used to similar European-American concert traditions in country music.

In addition, he played eight songs first recorded during his 1931 sessions by Paramount producer Arthur Laibly in Grafton, Wisconsin. Skip introduced I’m So Glad, the best known of these because of its 1960s cover version by the Cream (featuring Eric Clapton), with the story of how Laibly at first urged him to “play the song as fast as you can”. On actually hearing it at that speed, Laibly advised Skip to slow down. Listening to his performance of the song in concert, one can hear James gradually accelerate the tempo of “I’m So Glad” as a dramatic demonstration of his continued finger-picking prowess.

The circumstances of Skip James’ life, since he had resumed his performing his performing career in 1964, provided the fodder for three newer original blues compositions – Lorenz, concerns his wife Lorenzo Meeks James (1905-1977), and two blues about his hospitalizations, one in Tunica, Mississippi, Sickbed Blues, the other focusing on his stay at Washington D.C. Hospital Center Blues.

The remaining six songs were Skip James arrangements of a variety of popular songs. Backwater Blues recounted the disastrous flooding of the Mississippi river, in the winter and spring of 1927, as popularised by Bessie Smith and Lonnie Johnson recordings issued that year. Hard Headed Woman Blues adapted the 1934 hit “Black Gal (What Makes Your Head So Hard?)” of Joe Pullum, covered by Leroy Carr and Scrapper Blackwell. Catfish Blues, combined lyrics recorded by Robert Petway (“Catfish Blues Blues” DOCD-5671) and Tommy McClennan (“Deep Blue Sea Blues” DOCD-5670) in 1941, later to be reconfigured by McKinley Morganfield, aka Muddy Waters, in his rendition of “Rolling Stone” (1950).  Having been ordained as both a Baptist and Methodist minister, Skip’s singing of Petway’s verse,

“I went to the church house and they called on me to pray; I got all on my knees, but I couldn’t find a word to say”, must have possessed personal poignancy. Skip James’s Bloomington appearance introduced his unique “Bentonia (Mississippi) School” of minor key blues to an appreciative audience. Taken from the sleeve notes by Dr. Peter Narváez. 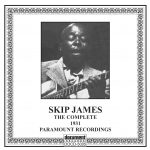 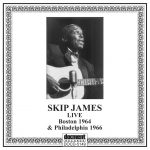 Tags: Bentonia Blues, CDs, DOCD-5633, Mississippi Blues, Nehemiah Curtis, Skip James, Skip James Albums, Skip James Bloomington Concert, Skip James discography, Skip James Live, Skip James Songs, Skip James tuning
This website uses cookies to improve your experience. We'll assume you're ok with this, but you can opt-out if you wish. Cookie settingsACCEPT
Privacy & Cookies Policy
This website uses cookies to improve your experience while you navigate through the website. Out of these cookies, the cookies that are categorized as necessary are stored on your browser as they are essential for the working of basic functionalities of the website. We also use third-party cookies that help us analyze and understand how you use this website. These cookies will be stored in your browser only with your consent. You also have the option to opt-out of these cookies. But opting out of some of these cookies may have an effect on your browsing experience.
Necessary Always Enabled
Necessary cookies are absolutely essential for the website to function properly. This category only includes cookies that ensures basic functionalities and security features of the website. These cookies do not store any personal information.
Non-necessary
Any cookies that may not be particularly necessary for the website to function and is used specifically to collect user personal data via analytics, ads, other embedded contents are termed as non-necessary cookies. It is mandatory to procure user consent prior to running these cookies on your website.
SAVE & ACCEPT
Loading Comments...