In 1932 a bunch of musicians traveled to Richmond, Indiana, to cut records for Gennett’s soon to be extinct cheap label Champion. Despite, or more likely because of, times being hard, the Picaninny Jug Band’s music is generally up tempo, jolly music, with Otto Gilmore’s capering percussion strongly featured. Even so, the discs sold poorly. Some of the titles were to be re-cut at the Memphis jug Band’s last, two-day session, for Okeh in 1934. The band that recorded then was an accomplished and versatile unit: Will Shade, Charlie Burse and Jab Jones all sang; Shade played guitar and harmonica, and Burse guitar and mandolin, while Jones doubled piano and jug (unless, as he claimed, Dewey Corley was the jug player for this date). Charlie’s brother Robert handled the percussion, while on fiddle there was Charlie Pierce, older than the rest of the band, and formerly a member of W C. Handy’s Orchestra. The Memphis Jug Band’s music had changed radically since their Victor days, in an effort to keep up with changing fashions. There is a considerable infusion of jazz, and Pierce’s virtuoso fiddle playing draws heavily on white country music. The effect of all this, and the crosstalk, scatting and laughter, often recalls the Western Swing that was coming out of Texas and Oklahoma, itself heavily influenced by blues and jazz. The jug, of course, made the MJB’s music distinct with instruments playing thunderous solos of remarkable fluency. Often, the selections amount to fiddle-jug duets, although on Gator Wobble and the high speed tour-de-force Jazzbo Stomp,it’s Shade’s harmonica that’s the feature. If their music had altered to the point where many of the discs described it as “novelty hot dance”, it was still distinctively black, and often still steeped in the blues; Jab Jones’s Mary Anna Cut Off (which refers to Marianna, Arkansas) is a barrelhouse piano classic, while She Done Sold it Out reverts to the sound of their 1929-30 recordings. Did the Memphis jug Band know that this was to be their last session? No doubt that Jug Band Quartette,its melancholy harmony contrasting elegantly with the celebratory lyrics, is a conscious, elegiac tribute to themselves, their fellow musicians “way down yonder in old Memphis, Tennessee”, and the music that even now sounds “so sweet, you know it’s hard to beat”. Informative booklet notes by Chris Smith. 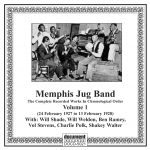 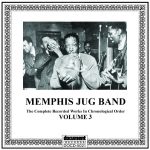 Tags: BDCD-6002, Charlie Burse, Jug Band, Memphis Blues, Memphis Jug Band, Picaninny Jug Band, Will Shade
This website uses cookies to improve your experience. We'll assume you're ok with this, but you can opt-out if you wish. Cookie settingsACCEPT
Privacy & Cookies Policy
This website uses cookies to improve your experience while you navigate through the website. Out of these cookies, the cookies that are categorized as necessary are stored on your browser as they are essential for the working of basic functionalities of the website. We also use third-party cookies that help us analyze and understand how you use this website. These cookies will be stored in your browser only with your consent. You also have the option to opt-out of these cookies. But opting out of some of these cookies may have an effect on your browsing experience.
Necessary Always Enabled
Necessary cookies are absolutely essential for the website to function properly. This category only includes cookies that ensures basic functionalities and security features of the website. These cookies do not store any personal information.
Non-necessary
Any cookies that may not be particularly necessary for the website to function and is used specifically to collect user personal data via analytics, ads, other embedded contents are termed as non-necessary cookies. It is mandatory to procure user consent prior to running these cookies on your website.
SAVE & ACCEPT
0
0
Your Cart
Your cart is emptyReturn to Shop
Continue Shopping