Son House – The Essence of the Delta

Son House and the Great Delta Blues Singers 1928 – 1930. DOCD-5002. Son House and the other seven artists on this collection have something special to offer within the country blues genre. Have you ever put an album into a player and been shocked as a surge of intensity, both beautiful and at the same time disturbing hits you like nothing before? You’re mesmerized, finding it hard to believe that this is a man, relying on little more than his relentless, pounding rhythmic guitar playing and his own dark, rich, voice. These are the first few seconds of Son House’s My Black Mama Part 1 recorded for Paramount in 1930 and just a hint to what is to come. 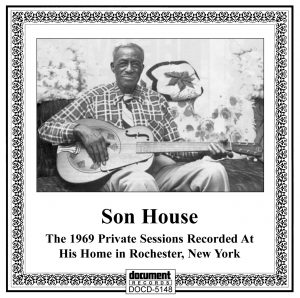 Son House At Home. The Legendary 1969 Rochester Recordings. DOCD-5148 Features the informal recordings of Son House and his wife Evie which were made by Steve Lobb at their Rochester home a few months before Son embarked on his second European tour. They remind us of the remarkable return to music of one of the greatest Mississippi Blues Singers. Click here for further information https://thedocumentrecordsstore.com/product/DOCD-5148/ 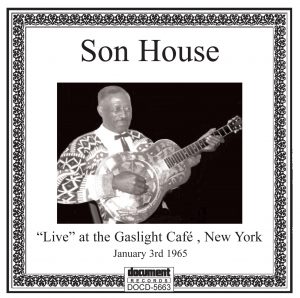 Son House Live At The Gaslight Cafe Jan 3rd 1965. DOCD-5663 Previously unreleased “in concert” recordings of the Mississippi blues marvel Son House, music associate of Charley Patton. Son House taught Robert Johnson and has inspired musicians from Muddy Waters to Johnny Winters and many others. Son House is known as the father of the Mississippi Delta Blues.. Click here for further information https://thedocumentrecordsstore.com/product/DOCD-5663/

A brief Son House biography  Eddie James `Son` House was born on March 21, 1902, near Clarksdale, Mississippi. Son House was the second of three brothers . When he was around seven or eight years old, his parents separated, and his mother took the boys south to Tallulah, Louisiana.

His first public appearances were preaching as a Southern Baptist near Lyon, Mississippi, in the twenties. In 1922-23 he stared work at the Commonwealth Steel Plant in East St. Louis, Missouri. He then moved to Louisiana to work on a horse farm in 1925. It wasn’t  until 1926 that Son House started to play guitar and working as a hired musician in Mississippi.

It was during this period that he started to get recognition by playing with Charley Patton, Willie Brown and other well-known  musicians. He even played for a while with Robert Johnson. Son House first recorded three tunes for Paramount in Grafton, Wisconsin, in 1930, they were; `My Black Mama` (1 & 2), `Preachin` The Blues` (1 & 2), `Dry Spell Blues` (1 & 2), as well as an unreleased version of Walking Blues.

His good friend Willie Brown traveled to Grafton with him and recorded `Future Blues` at this same session. Lyrically and musically they were masterpieces.

Even so, the Paramount records didn’t sell that well (as a result they are some of the rarest Blues 78s).

Consequently Son House didn’t record again until August of 1941, and again in July 1942 when Alan Lomax made some field recordings of Son and Willie with a small string band.

These sessions included tracks such as ensemble pieces like `Levee Camp Blues` and `Government Fleet Blues` that offer a glimpse of Son and Willie together.

There were also solo performances from these sessions like `Shetland Pony Blues` (can you hear the train in the background?) and `The Jinx Blues` (1&2) which are among Son`s best. There is a lot to learn from these sessions, musically and otherwise, Fo`Clock Blues is reminiscent of Tommy Johnson`s `Cool Drink of Water` and the first words of Camp Hollers hint at where Howlin` Wolf might have got `Killing Floor` from.

In 1943 Son House moved north to Rochester, New York, where he worked for the New York Central Railroad as a rivet heater in boxcar assembly. After the death of his musical partner Willie Brown, Son House had given up the guitar altogether and faded from public view until the country blues revival in the 1960s when he was “re-discovered” in 1964 by blues aficionados Dick Waterman, Nick Perls and Phil Spiro.

Before long Son House was playing the coffeehouse circuit after being tutored for a while by Al Wilson (of Canned Heat) and the Newport Folk Festival. In 1965 he signed a contract with Columbia records. Decades of hard working and living had slowed the hands of the old bluesman, but the field-holler rage of his voice remained.

These 1965 recordings for Columbia are a testament to his power; songs like `Death Letter` and `John The Revelator` leave the listener with no doubt as to the potency of the man`s music. People were amazed with the intensity of this music coming from a man thought then to be in his sixties.

As it turns out, House was most likely almost eighty years old when these recordings were made (the conflicting accounts of his age are thought to stem from the time he  apparently lied about his age, saying he was younger, to get the job with New York Central Railroad).

He subsequently toured extensively in the US and Europe and continued to record until 1976. 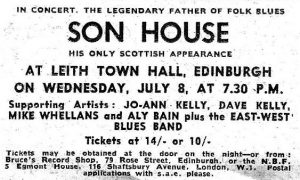 In this year Son House moved to Detroit and in 1980 he was inducted into the Blues Foundation Hall of Fame. Ill health plagued his later years and Son House died in 1988.  It was Son House who, more than anyone else, invented the Delta Blues. 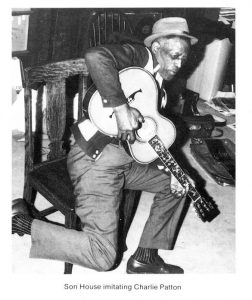 Unlike some blues guitarists of the 1920s and 30s, he was not a virtuoso, and there is nothing technically impressive about his playing. He more than made up for this by his innovative style, featuring very strong, repetitive rhythms, often played with the aid of a bottleneck, coupled with singing that owed more than a nod to the hollers of the chain gangs. The music of Son House, in contrast to that of, say, Blind Lemon Jefferson, was emphatically a dance music, meant to be heard in the noisy atmosphere of a barrelhouse or other dance hall.

Dick Waterman said of his playing; “When he played, his eyes rolled back in his head and he went somewhere else. Whether it was Robinsonville in the `30`s or wherever, he transported himself back without any trickery and became the essence of Delta. ” He would then finish the song, blink his eyes, and then re accustom himself to where he was at the time.” – Dick Waterman, remembering Son House.

Sites of interest: Examples of Son House`s lyrics can be found here.

Information about the great delta blues guitar player, which includes an interview with Dick Waterman.

Wikipedia page about Son House, although it does not have much more information than is written above, it does have lots of links off to other pages of interest.

A Preacher, A Killer: the incredible story of Son House, king of the Delta Blues  by Jerry Gilbert

Preachin’ the Blues .The Life and Times of Son House by Daniel Beaumont

https://global.oup.com/academic/product/preachin-the-blues-9780195395570?cc=gb&lang=en& Son House Discography https://www.wirz.de/music/housefrm.htm “Preachin’ the Blues”:  The Intersection of Christian and Blues Exegesis    and Hermeneutics in the Life and Lyrics of Son House  by Michael https://repository.asu.edu/attachments/110655/content/Broyles_asu_0010N_13065.pdf

Gillian Atkinson
Director at Document Records Ltd
Gillian Atkinson, one of the directors of Document Records, was bornEngland .she was involved the Manchester punk and new-wave scene which included a short stint with the fanzine ‘City Fun’. She went on to read and then teach law at Manchester University and she continues to be interested in and involved with in Copyright and Contract Law .
Shealso collects and blogs about music, customs and rituals connected to the changing of the seasons.