“I can get to Hell just as quick as you can.”

The Profanity of John Carson’s Fiddle

Over the course of the seven volumes of Document Records Fiddlin’ John Carson’s “Complete Recorded Works in Chronological Order” the first-time listener will hear old-time, hillbilly music played with self-awareness and mastery by one of the nineteenth century’s first fiddle ambassadors to radio and shellac. Sometimes with his daughter (Rosa Lee “Moonshine Kate” Carson), a rotating assemblage of pickers known as the Virginia Reelers, or solo, John Carson’s take on American folk music finds common tunes translated through his most idiosyncratic and opportunistic sensibilities. It is his vision which guides these 165 sides, but his is not the only controlling voice heard on these records. Just as noticeable are the audible sighs, whistles, laughs, and whispers that belong to his fiddle: wood and gut and horsehair and nothing more than a devil on his shoulder drinking and singing as it pleases.

Even without his instrument, Carson had enough of the devil in him to warrant note along with these recordings. No excuses can be made for his racism, anti-Semitism, or downright nastiness. Over the course of his life he was an active member of the Klu Klux Klan, called for the lynching of Leo Frank through song, railed against Evolution, and enjoyed a (self-designated) reputation of being a moonshiner. A son of a bitch first and a musical opportunist second, he brought his reputation to bear on his song lyrics and recorded comedic skits.

The symbiotic relationship between this fiddle and fiddler is front and center in the tune “Hell Bound For Alabama” (Volume #4). This fiddle tune adheres to many of the conventions of the traditional form but varies itself with a genius and/or twisted variation. The A part of the tune has only six measures, which makes it seem as if it is resolving itself in the first quarter of the B part. The effect is unnerving and wild, as Carson’s fiddle truly does seem accustomed to the idea of damnation. An unworldly and unpleasantly high sound flies around the melody as well, at various points during the melody. It seems to be a second fiddle (perhaps Earl Johnson) adding this strange and ghostly part but the logic of it confuses the listener’s ear. The fact that this is only the second most unnerving thing about the performance speaks to Carson’s strange sensibilities.

Carson knew how to pare back a song as well, eliminating all but the most necessary of musical parts to achieve his whole. Take “I’m Nine Hundred Miles From My Home” (Volume #2), whose introduction, a standard modal, old time turn on the melody slows as he begins the verse. Carson betrays his established meter as soon as he starts singing though, slowing and simplifying his playing so that it falls in a loping lockstep with the words as he sings.

He’s not playing the melody he’s singing, but rather keeping rhythmic time with his bow, sweeping it back and forth across a single note. The effect is ominous and forbears a debt to be paid-a slow walk to the hangman’s gallows or, worse yet, a life without his woman, wallet, or well-being. When it comes time for him to return to the melody between chorus and verse, he adds time without stealing it from the end of the phrase. John Carson is the only one who could tap his foot along with this version and yet his fiddle accompanies him to the end. Which of the two of them is the cart and which is the mule will never be determined…did he slow his fiddle playing to match is personal time signature, or was he being led by it? Is John Carson the man in the song? He tells you he is, in the last iteration of the chorus when he promises “If the train runs right, you’ll see John tomorrow night/Lord I’m 900 miles from my home.” He addresses the audience, or perhaps his violin, just as personally.

In a duo, trio, or larger assemblage, the accompanying musicians chop away at their guitars and banjos, perhaps in order to keep Carson in time or in order to hang on for dear life through to the end of the tune. “Goin’ Where the Climate Suits My Clothes” or “Hen and the Rooster” (both Volume #6) showcase a commitment to slides and atonal double-stops that give the songs an unhinged, feral quality. Peeking through the jaded technique of a champion Dixie fiddler and musical physicianer is something unexpected, easily taken for mistakes if not for his commitment to their repetition. Far from a false primitivism, Fiddlin’ John Carson seems to be accessing a musical language whose rules were as unintelligible as they were personal. 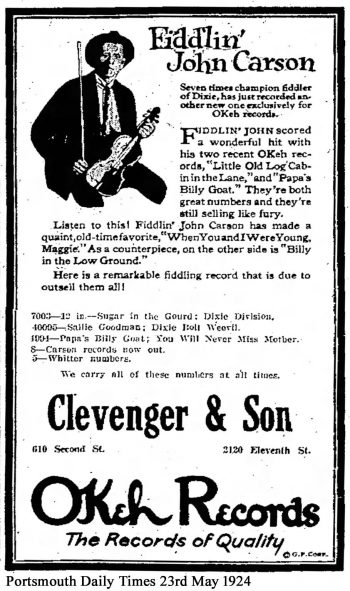 All of this is not to say that Carson didn’t find the time to record secular sides, but even those come across with a wink and glissando. There’s little reverence in these tunes, especially the gleefully impious “It’s A Shame To Whip Your Wife on Sunday” (Volume #4), which so delights in its subversive subject matter, that Carson seems to jump the beat every time a new verse, and vice, comes along. That’s Rosa Lee and/or the Virginia Reelers accompanying him on these ventures, like the duet “I Want to Make Heaven My Home” and “At the Cross” (on Volume #7 and 6# respectively). The latter takes the scene at Golgotha and (is it reverently or mockingly?) incorporates the words to “Amazing Grace” as the first verse. There’s a marked difference between the playing of Carson and his, literal second fiddle, Earl Johnson. It is Johnson who accompanies Carson on his recitation of the “Amazing Grace” verses and the playing is too precise and obedient to the melody to belong to the man singing.

Though he recorded his last side in 1934, there is still a place for Fiddlin’ John Carson’s style in the most current generation of old-time fiddlers. The likes of Ferd Moyce and Frank Fairfield, most famously, understand this relationship between fiddler and fiddle when performing together without the interference of other musicians. They know that when there’s no band, that time is irrelevant and the tune is too. All that matters, as demonstrated throughout Document Record’s seven volume collection, is that you saw your bow without a plan and let your fingers fall where they may. If you ever get lost, inch your left year closer to the bridge and your fiddle will whisper what to do though, as Carson did, you will have to take its advice at your own peril. Joe Kille Copyright: 2020 Document Records 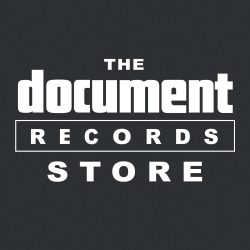