The Origins of "In The Mood " - The Document Records Store

The Origins of “In The Mood “

He is best remembered these days for his work with Fats Waller on songs like “Ain’t Misbehavin'” and “Honeysuckle Rose” . He was responsible for at least contributing or composing over 800 songs in his lifetime.

He wrote some lyrics to the World War 2 hit In the Mood . The song is forever associated with Glenn Miller but its history and origins are complex and controversial .

Please give us a shout if the Youtube links do not work .It is frustrating that some versions of songs are restricted in some countries
Our  article is not original research and  has relied heavily upon the Wikipedia Page “In the Mood “

Who Wrote “In The Mood?”

“In the Mood” was an arrangement by Joe Garland based on a pre-existing melody. Lyrics were added by Andy Razaf. The main theme, featuring repeated arpeggios rhythmically displaced, previously appeared under the title of “Tar Paper Stomp” credited to jazz trumpeter and bandleader Wingy Manone.

When Was In The Mood Written?

Manone recorded “Tar Paper Stomp” on August 28, 1930 in Richmond, Indiana and released it as a 78 single on Champion Records as by Barbecue Joe and his Hot Dogs / Personally I cannot find any image of that but we do see it on Champion by Manone   It was re-released in 1935 as by Wingy Manone’s Orchestra. The recording was re-released in 1937 as a Decca 78 single as by Wingy Manone and his Orchestra.

Horace Henderson used the same riff in “Hot and Anxious”, recorded by his brother’s band, Fletcher Henderson and his Orchestra, on March 19, 1931, which was released on Columbia Records as by the Baltimore Bell Hops.

Don Redman recorded “Hot and Anxious” in 1932 on Brunswick Records and  we can really begin to hear the tune morphing into something else.

Under copyright laws, a tune that had not been written down and registered with the copyright office could be appropriated by any musician with a good ear. Wingy Manone had brought up the issue of the similarity between “Tar Paper Stomp” and “In the Mood” to Joe Garland and to the publishing company of the song, Shapiro, Bernstein, and Company of New York.

Manone also discussed the issue in Down Beat magazine. “Tar Paper Stomp” was copyrighted on November 6, 1941 as a pianoforte version by Peer International.

The first recorded version of “In the Mood” was made by Edgar Hayes and his Orchestra in 1938, with Garland participating, released as a B side to their recording of “Stardust” on Decca Records. In this recording there was a baritone sax duet rather than a tenor sax battle.

The riff had appeared in a 1935 recording by the Mills Blue Rhythm Band entitled “There’s Rhythm In Harlem” released on Columbia Records which had been composed and arranged their  arranger and  Saxophone player Joe Garland .This group was led by Lucky Millinder and financed by Irving Mills.

Wingy Manone recorded a new song entitled “Jumpy Nerves” on April 26, 1939 that incorporated the riff from “Tar Paper Stomp” which was released as a 78 single that year on RCA Bluebird.

Wingy Manone recorded a new song entitled “Jumpy Nerves” on April 26, 1939 that incorporated the riff from “Tar Paper Stomp” which was released as a 78 single that year on RCA Bluebird.

“As pointed out by music historian Dennis Spragg of the Glenn Miller Trust, up until this time almost all the fragments of “In the Mood” had been composed and performed by African American artists, thereby limiting their radio airplay and record sales. Eventually, seeking wider exposure, Garland would begin to pitch the memorable tune to various white bandleaders.” quote courtesy Library Of Congress

Glen Miller – In The Mood

Before offering it to Glenn Miller, Garland sold the tune to Artie Shaw in 1938, who chose not to record it because the original arrangement was too long. However, he did perform it in concert. The initial Artie Shaw performance was over six minutes in length with a lack-luster audience response.

The tune was finally sold in 1939 to Glenn Miller, who played around with its arrangement for a while. Although the arrangers of most of the Miller tunes are known, things are a bit uncertain for “In the Mood”. It is often thought  that Eddie Durham (who contributed other arrangements on the recording date of “In the Mood”, August 1, 1939 as well), John Chalmers, Chummy MacGregor (the pianist, composer, and arranger in the Glenn Miller Orchestra) and Miller himself contributed most to the final version. According to the account by MacGregor, “all they used of the original arrangement were the two front saxophone strains and another part that occurred later on in the arrangement.” Both MacGregor and Miller were involved in creating the final arrangement: “MacGregor mentioned that additional solos were added to the original arrangement and he wrote the finishing coda. Miller probably edited some of the arrangement along with MacGregor.”

“Miller’s “In the Mood” (RCA B-10416-A), when released in July of 1940, and no doubt aided
by its high energy feel and slightly risqué title, became a success with audiences. It would go on
to be broadcast on 62 occasions by Glenn Miller and his Orchestra on their CBS program
“Chesterfield Moonlight Serenade,” on “Coca Cola Spotlight Bands,” and on remote broadcasts
for NBC and Mutual and Miller and the Band played it in Sun Valley.

“In the Mood” proved to have staying power even then. Soon after its debut, everywhere you turned, Americans were awash in the “Mood.” Though Miller never recorded the song with the Razaf lyrics (“Who’s the lovin’ daddy with the beautiful eyes/What a pair o’ lips, I’d like to try
‘em on for size.”), other bands did. The first was, interestingly, also for RCA Records. In November 1939, that label released a version with singing provided by the Four King Sisters.

Meanwhile, songstress Paula Kelly sang “In the Mood” accompanied by Al Donahue and his Orchestra also that same year for a Vocalion (Columbia) release. By the end of 1940,” courtesy Library of Congress

Two editions of the sheet music are in common circulation. The 1939 publication, credited to Garland and Razaf, is in A♭ and has lyrics beginning, “Mister What-cha-call-em, what-cha doin’ tonight?” as can be heard
The 1960 reprint, credited only to Garland (with piano arrangement by Robert C. Haring), is in G and has lyrics beginning, “Who’s the livin’ dolly with the beautiful eyes?”

Just before we close maybe we should  say that we think that aspects of the  tune  have  its roots further back than Wingys 1930 version .Looking in our catalogue we find  on   JPCD-1518-2  ” Clarinet Get Away “by  O’Bryant’s Washboard Band (1925).

You can hear the song here: 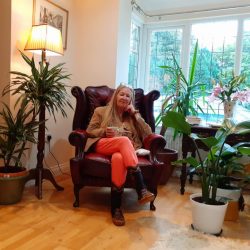 Gillian Atkinson
Director at Document Records Ltd
Gillian Atkinson, one of the directors of Document Records, was born inEngland .She was involved the Manchester punk and new-wave scene which included a short stint with the fanzine ‘City Fun’. She went on to read and then teach law at Manchester University .She continues to be interested in and involved withCopyright and Contract Lawandrecently tooka seat in Media Law at NYU
Shealso collects and blogs about music, customs and rituals connected to the changing of the seasons and environmental issues