Alberta Hunter was the consummate entertainer: a remarkable singer and song stylist, songwriter, fashion trendsetter, dramatic actress, populariser of contemporary dance steps, diplomat and world traveller, and above all a charismatic communicator through the medium of song.

Like many of her peers in vaudeville who recorded in the first wave of what has come to be known as the “classic” blues, she was not strictly a blues singer, but a cabaret performer whose repertory encompassed a variety of styles. Classic Blues & Vaudeville Singers: the Alternate Takes (DOCD-5573) is scheduled to contain more outtakes by Alberta Hunter, and altogether, these CDs will be able to give an accurate and virtually complete aural portrait of the early recordings of one of the great singers of the twentieth century.

Alberta, who also recorded under the names Josephine Beatty, Helen Roberts, May Alix, and Alberta Prime, cut about 90 sides for ten different labels between the years 1921-1940. As a sort of dessert platter in the wake four volumes of her reissued “complete works” that were released during the late ’90s, Document brought out a beautifully decorated edition containing 22 alternate takes dating from 1921-1924. This is for people who love antiquated jazz and blues recordings, and might even enjoy an occasional taste of historic 78 rpm phonograph record surface noise. Hunter, who sang contralto or even borderline mezzo-soprano during the ’20s, is heard backed by pianists Fletcher Henderson or Eubie Blake and various ensembles under their leadership; by Sam Wooding’s Orchestra, the Original Memphis Five, the Paramount Boys (cornetist Tommy Ladnier, clarinetist Jimmy O’Bryant, and pianist Glover Compton); cornetist Joe Smith (soon to make his all-time best records with Bessie Smith); pianist and bandleader Lovie Austin with clarinetist John Obrigant (whose name was also spelled Oubrigant and Obregon) and, on the two old-fashioned harmony vocal tracks that close the collection, the Elkins-Payne Jubilee Quartette, who, as the Elkins-Payne Jubilee Singers have their own collection in the Document catalog. 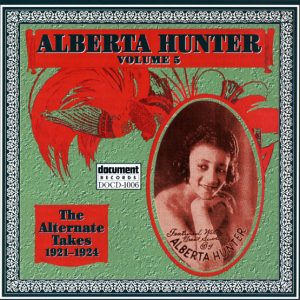