Tags: baby please don't go, BDCD-6003, Big Joe Williams, bottleneck guitar, Joe Williams, Mississippi Blues, nine str
BDCD-6003
Big Joe Williams was a true original; his music was as wayward, volatile and cantankerous as the man himself. Nowhere is this more apparent than on his first two 1935 sessions for Bluebird. He was still playing a 6-string guitar but already his style was unique in its disregard for metre, the spontaneous flurries of mandolin-like strumming and hammered bass runs. He also played with a bottleneck but, again, like no one else. When Henry Townsend joined him on Somebody’s Been Borrowing That Stuff, the result was tumultuous, joyous music-making. The second session added violin (not a one-string fiddle, despite B&GR) and washboard for some of the most individual and exciting music to be heard on Bluebird. Baby Please Don’t Go and Stack O’ Dollars became standards in his repertoire but never sounded like they did here. Chasey Collins‘ two tracks from the session are tacked on to the end of Volume 2; “Walking Blues” and “Atlanta Town” draw forth wild instrumental flights from Joe and the violinist. The marathon 1937 session featuring Sonny Boy Williamson, Robert Lee McCoy and Joe was the beginning of an enduring partnership which these CDs celebrate. The Bluebird and Columbia sessions saw Joe and Sonny Boy develop a mutual understanding that, as Paul Oliver has pointed out, presaged a similar partnership between Muddy Waters and Little Walter. Other joys here include Joe’s tribute to President Roosevelt, His Spirit Lives On, released in 1945 on Chicago 103 and his Bullet single from 1949. Jivin’ Woman and She’s A Married Woman are also known as “Kings Highway and “Meet Me In The Bottom” and, to these ears, do not feature a drummer. Big Joe doesn’t inspire the awe accorded to Robert Johnson, Son House and Charley Patton but his music is equally rewarding, consistently enjoyable and subtly addictive. With forty-five tracks and more than two hours playing time, these two Document volumes of early recordings from Big Joe Williams are gems.
Neil Slaven
Blues & Rhythm review: Issue 61, June 1991 Also available 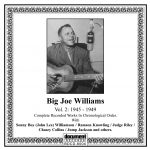 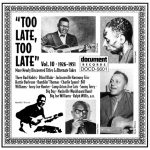 Tags: baby please don't go, BDCD-6003, Big Joe Williams, bottleneck guitar, Joe Williams, Mississippi Blues, nine str
This website uses cookies to improve your experience. We'll assume you're ok with this, but you can opt-out if you wish. Cookie settingsACCEPT
Privacy & Cookies Policy
This website uses cookies to improve your experience while you navigate through the website. Out of these cookies, the cookies that are categorized as necessary are stored on your browser as they are essential for the working of basic functionalities of the website. We also use third-party cookies that help us analyze and understand how you use this website. These cookies will be stored in your browser only with your consent. You also have the option to opt-out of these cookies. But opting out of some of these cookies may have an effect on your browsing experience.
Necessary Always Enabled