Abridged from this albums original booklet notes. Blind Lemon Jefferson started 1929 with a very strong pair of recordings: Eagle Eyed Mama repeats the title phrase in every verse, reinforcing the imagery like a pop song, while Dynamite Blues offers a violent solution to his woman trouble (blow her up late at night!) in a cathartic fantasy. Peach Orchard Mama, the first of a block of seven masters made at his next session and the only one to feature a short guitar solo, was probably Jeffersons last major hit. It was re-recorded in the summer, along with its ‘B’ aide Big Night Blues, but not released until September. Big Joe Williams successfully revived Peach Orchard Mama in 1941(Bluebird B-8774). The session ended with That Black Snake Moan No. 2, a comparatively lifeless reworking of his massive 1926 / 7 hit and the fourth time he had utilized the theme on record. Two notable titles sandwiched between the extremes were Oil Well Blues (complete with spoken introduction), its imagery most appropriate to a Texas-born blues singer, and Tin Cup Blues which evokes the hard time when Blind Lemon Jefferson entertained on street corners for small change in his home state before he became a star recording artist. Jeffersons last recording session was held in the Gennett studios in Richmond, Indiana in September, 1929 and produced an unprecedented twelve masters. Lemons voice sounds thicker on these recordings and one could speculate that this was a result of declining health, perhaps due to heavy drinking, but there is no real evidence of this and it may only be the result of the different studio sound. The singing was still ear, catching, the guitar playing fluid and the songs imaginative. Bed Spring Blues provided the source for Rich Trices 1937 Trembling Bed Springs Blues (Decca 7701). Cat Man Blues ultimately derives from the traditional folk song Our Goodman (a 1960s UK pop hit as Seven Drunken Nights) about the cuckolded husband but Lemons persona is more astute and threatens: Catman, hes got nine lives, he gonna need them when I gets through. Three verses from the Jefferson recording reappear (in adapted form) in Blind Boy Fullers 1936 Cat Man Blues (Vocalion 03134), Bakershop Blues and Long Distance Moan were coupled together for a November release that was probably the last in his lifetime. That Crawlin Baby Blues is a remarkable piece in which infidelity is revealed by as infant. Having graphically described his problems with bed bugs and chinches in earlier blues, Lemons brilliant Mosquito Moan recounts his persecution by those troublesome biting insects. Characteristically, on his last recording, Bootin Me Bout, Blind Lemon Jefferson is still chasing browns and getting into trouble:

He (her father) must think his girl is made of purest gold. Don’t want her to go near no man, pretty soon she’ll be too old. 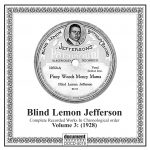 Tags: Big Joe Williams, Blind Boy Fuller, Blind Lemon Jefferson, Blues, Bob Groom, Country Blues, Country Blues Guitar, DOCD-5020, Gennett, guitar, Paramount, Rich Trice, Texas Blues
This website uses cookies to improve your experience. We'll assume you're ok with this, but you can opt-out if you wish. Cookie settingsACCEPT
Privacy & Cookies Policy
This website uses cookies to improve your experience while you navigate through the website. Out of these cookies, the cookies that are categorized as necessary are stored on your browser as they are essential for the working of basic functionalities of the website. We also use third-party cookies that help us analyze and understand how you use this website. These cookies will be stored in your browser only with your consent. You also have the option to opt-out of these cookies. But opting out of some of these cookies may have an effect on your browsing experience.
Necessary Always Enabled
Necessary cookies are absolutely essential for the website to function properly. This category only includes cookies that ensures basic functionalities and security features of the website. These cookies do not store any personal information.
Non-necessary
Any cookies that may not be particularly necessary for the website to function and is used specifically to collect user personal data via analytics, ads, other embedded contents are termed as non-necessary cookies. It is mandatory to procure user consent prior to running these cookies on your website.
SAVE & ACCEPT
Loading Comments...