Abridged from this album’s original booklet notes. Pianist Sammy Price is credited with bringing Jefferson to the attention of Mayo Williams of Paramount Records, who were looking for other male blues artists to follow up their initial success with Papa Charlie Jackson. Curiously, these were two old spirituals which were later issued under the pseudonym ‘Deacon L. J. Bates‘. Perhaps the idea was to test the market for this unusual-sounding performer, however the recordings were held back for release until the following autumn. Certainly they lack the impact of Lemon’s blues performances. A more passionate version of Pure Religion was recorded by Blind Gussie Nesbit in 1930 (Columbia 14576-D) while the 1927 recording of I Want To Be Like Jesus In My Heart by Mississippi blues singer Sam Collins (Gennett 6291), with slide guitar accompaniment, offers a useful comparison with Lemon’s recording. Early in 1926 Blind Lemon Jefferson was recalled to the studio to record some blues. The four sides from this session were used for his first two records. Booster Blues and Dry Southern Blues were issued around the beginning of April and sales were obviously good as Paramount quickly issued Got the Blues and Long Lonesome Blues. This second record was phenomenally successful, tapping a market thirsty for Southern-styled blues. Within a few weeks Got The Blues and Long Lonesome Blues were remade at the Marsh Laboratories and these new recordings were used for later pressings of Paramount 12354. Lines and verses from Jefferson’s songs crop up in many later blues recordings. Robert Johnson adapted v.2 and v. 3 of Dry Southern Blues for his Love In Vain Blues and Walking Blues. The tremendous success of Lemon’s Black Horse Blues probably inspired Tommy Johnson‘s Black Mare Blues and Charlie Patton to record his Pony Blues. Jefferson himself drew on the blues tradition extensively. Corinna Blues uses the tune and first verse of See See Rider, while Jack O’Diamonds is a straight version of an old gambling ballad, with Lemon playing knife-style slide guitar in an open tuning, for the only time on record. Another old-time number he recorded was Beggin’ Back, a variant of the piece recorded by Frank Stokes as Take Me Back (Victor V-38531) in 1928, but composed as far back as 1898 by B. McMahon. In Old Rounders Blues, a celebration of dissolute living which opens with an ear-splitting cowboy yell, Lemon sings “ain’t goin’ to marry, ain’t gonna settle down”. However, he did have a wife down in Texas, Roberta, and one wonders what she made of lines like “I got a girl for Monday. Tuesday, Wednesday, Thursday, Friday too” (in Chock House Blues) as Blind Lemon Jefferson spent more and more time up north in Chicago. (Furry Lewis and Jim Jackson also made use of the “girl for every day in the week” idea on record.) Perhaps he was thinking of her when he sang (in Stocking Feet Blues) the striking verse “Somebody just keeps on followin’ me, she got hair like a mermaid on the sea”. That Black Snake Moan, with its strong sexual imagery, was a pre-Christmas hit, giving Lemon 6 successful releases in 1926. Victoria Spivey always claimed, with some justification, that Jefferson based his song on her Black Snake Blues (OKeh 8338). However, Lemon’s song stands on its own merits and its popularity was such that he made no less than three later versions of the theme. Blind Lemon’s first 1927 release coupled Wartime Blues, composed of floating verses but with a title verse that harked back to World War 1, and Booger Rooger Blues, which mentions various Dallas neighborhoods where he had lady friends. In March Paramount released Bad Luck Blues and Broke And Hungry, which probably inspired Sleepy John Estes‘ first Victor recording, Broken-Hearted, Ragged And Dirty Too, in September, 1929. In April Paramount put out the first Blind Lemon Jefferson record that bore the slogan “electrically recorded”. Rabbit Foot Blues, which opens with the immortal line, “blues jumped a rabbit, run him one solid mile”, and Shuckin’ Sugar Blues, with its attractive melody and catchy title refrain. Jefferson’s uncompromising approach and consistently high standard of performance ensured that his records continued to sell in large quantities until the end of the decade.

Also in the series 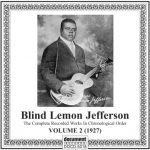 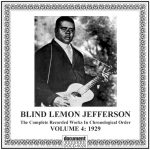 Tags: Blind Gussie Nesbit, Blind Lemon Jefferson, Bob Groom, Bottleneck-Slide Guitar, Charlie Patton, Country Blues, Country Blues Guitar, Deacon L. J. Bates, DOCD-5017, Frank Stokes, Furry Lewis, Gospel, Jim Jackson, Mayo Williams, Papa Charlie Jackson, Paramount, Robert Johnson, Sam Collins, Sleepy John Estes, Texas Country Blues, Tommy Johnson, Victoria Spivey
This website uses cookies to improve your experience. We'll assume you're ok with this, but you can opt-out if you wish. Cookie settingsACCEPT
Privacy & Cookies Policy
This website uses cookies to improve your experience while you navigate through the website. Out of these cookies, the cookies that are categorized as necessary are stored on your browser as they are essential for the working of basic functionalities of the website. We also use third-party cookies that help us analyze and understand how you use this website. These cookies will be stored in your browser only with your consent. You also have the option to opt-out of these cookies. But opting out of some of these cookies may have an effect on your browsing experience.
Necessary Always Enabled
Necessary cookies are absolutely essential for the website to function properly. This category only includes cookies that ensures basic functionalities and security features of the website. These cookies do not store any personal information.
Non-necessary
Any cookies that may not be particularly necessary for the website to function and is used specifically to collect user personal data via analytics, ads, other embedded contents are termed as non-necessary cookies. It is mandatory to procure user consent prior to running these cookies on your website.
SAVE & ACCEPT