Tags: Bunk Johnson, DOCD-1001, George Lewis, Jazz, New Orleans Jazz
Bunk Johnson Vol 1: “New York” The Complete Decca, Victor and V Disc recordings, Plus Alternate Takes (November 1945 – January 1946) Bunk Johnson and his New Orleans Band With; Bunk Johnson, trumpet; Jim Robinson, trombone; George Lewis, clarinet; Alton Purnell, piano; Lawrence Marrero, banjo; Alcide “Slow Drag” Pavageau double bass,; Warren “Baby” Dodds, drums and “Red” Jones, drums. Genre: New Orleans Jazz Informative booklet notes by Howard Rye. Detailed discography. The recordings made by Bunk Johnson and the musicians associated with him have been the subject of controversy since they were made. It could hardly have been otherwise. Born in New Orleans, on 27th December 1879 according to his own account, but almost certainly ten years later in reality, Willie Geary Johnson undoubtedly played a part in the early history of jazz, though not as crucial an innovative part as he and his backers would have liked. However, after being in the forefront of developments in New Orleans, probably around 1907-1914, he worked thereafter mainly in travelling circuses and in upstate Louisiana. He eventually settled in New Iberia, where he worked with the local Banner Band and the Black Eagle Band from nearby Crowley. He did not record during the vintage-jazz area. The story of how, after spending the thirties as a truck-driver in New Iberia, he was contacted by a group of enthusiasts is one of the great jazz legends, losing comparatively little from being substantially true. The basic elements of the band heard on this CD were recruited for his first session for the Jazz Man label on 11 June 1942. It has often been insinuated that he was in some way saddled with George Lewis and the others through the romantic notions of his backers, but it appears that he himself originally suggested Lewis, who had worked with him in Evan Thomas’s band in 1931, shortly before his effective retirement from professional music.

Three members of the band heard here were recruited on this occasion. Lewis, at nearly 42 years of age, had not previously recorded. Trombonist Jim Robinson, born in Deer Range, La., in 1892, was a veteran of the justly revered Sam Morgan sessions of 1927, and had also been a member of Kid Rena’s band when it made the first recordings of the New Orleans renaissance in 1940. Banjoist Lawrence Marrero, a few months younger than Lewis, was Lewis’s regular banjo player. These associations continued through the long series of recordings for Bill Russell’s American Music label. For these, drummer Warren “Baby” Dodds was recruited by Russell and brought down from Chicago. Perhaps the greatest traditional-jazz drummer, he had had wider public exposure and was already well known to record collectors and enthusiasts. Bassist Alcide “Slow Drag” Pavageau was a regular associate of Lewis’s. 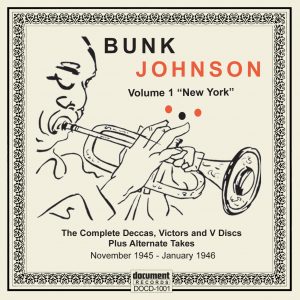